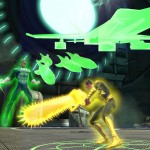 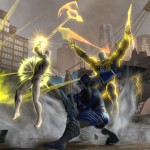 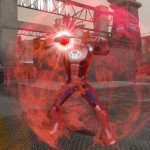 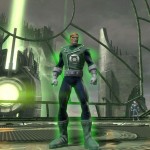 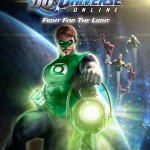 As Game Director Mark Anderson explained, “Light Power” is a brand new set of abilities that allows players to use power rings to channel emotions (like will, fear, or rage) into constructs. The light powers come in the form of machine guns, chain saws, or even jets, and they are activated if a player is able to perform the correct combo. When you activate one of these light power forms, you go into one of those modes and have to perform the special combos to unlock the ability. On top of that, you can chain them. So players can combine chainsaw that goes into a flurry of light whips, followed by boxing skills, depending on whether the players hit the correct combos. Heroes will get 24 green-colored will power, while Villains will get 24 yellow-colored fear.

Players will have two options when it comes to trying out these new light powers: create a new character or respec their current level 30 character. “We want to let people play how they want to play,” Andersen said.

DC Universe’s first downloadable content pack will give players access to light powers for the first time. “You’re going to be able to create a character using the power of will,” Andersen said. “We’re putting those rings in the hands of players.” Andersen made it clear that the ring isn’t your weapon. The ring is associated with light powers, but you still get to pick a fighting style and weapon. “The ring is layered on top of the other fighting styles,” he said.

The Green Lantern has been a mainstay for DC Comics fans for more than 60 years, and is a fan favorite among our players,” said Mark Anderson, Game Director of DC Universe Online. “We’ve listened to the feedback, and fans can now create their own Lantern-inspired characters including the use of light powers.”

In addition to the new light power set, players will also be able to interact with Green Lantern based characters and content in DC Universe Online in these all-new gameplay scenarios:

S.T.A.R. Labs – Deep within S.T.A.R Labs, Brainiac seeks to control experimental devices that will allow him to harness the power source behind the Lantern Corps’ rings. This attack throws the Lantern Corps into chaos, and players must join a fragile truce between the Green and Yellow Lantern Corps to bring the powerful devices back under STAR Labs control.

Coast City – Players must battle their way through the “City Without Fear” to Ferris Aircraft, the home of fighter ace Hal Jordan. Here they face the unbridled rage of the Red Lantern Corps in a showdown to save the city and the Universe.

DC Universe Online’s “Fight for the Light” DLC pack will be available for download for $9.99 USD this summer for PC and PlayStation®3 players.

This entry was posted in news and tagged Dcuo Light Power, Fight for the Light, Green Lantern Corps. Bookmark the permalink.