The following tip-tricks and hints are made by Iceman2537 and his friends over at The Society “USPC server league”. The main purpose of this guide is to help all the green 30’s to get the marks needed for better gear so they can get in to the harder alerts raids and missions.

General tips – these will help in any group situation.

ALWAYS clear the rooms the apes will follow if you don’t kill them, especially in the room where you free the encased humans. Yes you can trigger the door as soon as you enter the room but the trash and the Pounders will follow behind you if you try to bulldoze past.

When fighting Two face and his goons use lots of AoE and spread attacks. That way you are doing damaging to all three of them at the same time. Don’t let heads heal them. I like to use duel pistons on full auto it damages all three of them and it will keep heads from healing them. During the Mr. Freeze fight freeze covers himself in a frost bubble He can NOT be hurt in this thing instead you should just block. If he hits you when in the bubble and you’re blocking it will knock him down. Meaning he can’t attack you. Once his suite is damaged he calls in reinforcements take out the engineer FIRST, he will heal Mr. Freeze then take out the rest of the reinforcements and resume attacking Mr. Freeze.

Necro Magent– Now with longer lasting shields! Seriously he’s in a shield for most of the fight no choice but to blow up the caskets as he calls them and wait for the shield to drop.
Isis Fight– During her pauses where she summons Mummies or Scarabs, go to the left or the right and stand on the stone (not the sand) and face the sand you can pick off pretty much all the mummies or scarabs at that point with minimum damage with pure melee and no powers, great way to recharge your blue bar mid fight.

Try to stay away from the walls and pillars some of them fire off sparks that can kill you faster than the goons you are fighting. In the Deathstroke/Croc fight let Nightwing hold the Aggro on one (usually Deathstroke) focus and kill the one he doesn’t have aggro on then switch.

Security consoles numbered from left to right when facing them, with the locked door behind you and the scientist to your left. The order I use to open the door is 4, 1, and 3. In the room after fighting booster there is a strange box in the far left corner. Don’t activate it just destroy it. You get an extra mark of triumph. Activating it calls in a bunch of hard to kill hive guys. Good Killing Sequence- Mortuary Bees (healers) aka the glowing ones, Brainiac Drones, (makes those horrid glowing disks that chuck you everywhere), THEN the Killer Bees Yes they do massive damage but they are the SLOWEST you can usually kill the first two tiers before they get to you than those guys are easy to kill w/o the back up.

In the room where you have to activate the lantern five time. One of you pulls agro and the other activates the lantern. One of two things triggers the next wave the lantern cooling down or KO’ing the current wave. Lanterns with shields are vulnerable to melee attacks. The Lantern DOES heal you, best combo for this instance? Healer (in DPS mode) and a Tank, Tank holds the Aggro in the mob rooms…like the lantern room, Arkillo’s fight and the final boss room…and can take massive damage with little worry while the Healer stays near the batteries and triggers them as soon as it cools down while dropping heals on the tank and ranged attacks on the trash.

After activating the EMP there is a defective Omac nearby activate him and take him out for an extra make of triumph. The freeze trick after you fight the big flaming Omac there are two glowing Nano’s they will shield and heal each other. So get a freeze barrels from the beginning of the level. Freeze them, separate them, them kill both of them at the same time. Before fighting Omac Delta through all the big metal rock things over by the charge station it will make charging and using them easier. When Delta summons up some drones move to the alcove by the door you entered through. This way you only need to deal with the drones. The final room here is the pattern that works the best.

Team work one of you caries the repulse the other caries a bomb. Fight Vice from inside the repulse field. It won’t hurt him but it will keep other red lanterns off your back. When fighting Atrocitus Through the repulse from one charge station to the next. As long as you hit the charge station it will power up and you’ll be able to out run Atrocitus to it taking less damage in the process.

Starting out you will be tempted to make a mad dash for the end of the tunnel. Don’t the reapers will cut you down before you get half way there. Just keep moving and killing the reapers and you’ll be fine. Once in the past start clearing rooms until you get to fight the pide piper. The key to this fight appears to be control breaks. The piper will constantly stun one of you and the other has to attack him to break the other out. The final boos fight is a rather strait forward fight. He does summon two crystals the span trash so I always try to break the crystals as soon as I can.

Easiest to Hardest Duos in our Opinions… 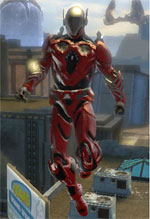 This entry was posted in guides and tagged duos, speed feat. Bookmark the permalink.