This map is made from collections found in the Normal version. I don’t think there is a difference between the normal and hard mode versions.

Orange squares are collections that are INSIDE BUILDINGS, and the red one is an unconfirmed one that I thought I saw once, but never found when creating the map. You will find collection pieces for the RAREST OF MATERIALS and the SCIENCE SQUAD EXPERIMENTS collections.

Remember: You will probably spend HOURS finishing your collections here, so BE PREPARED!

Since looking at a square on the map doesn’t tell you the whole story, I will give a little more of a geographical location for them, especially for the ones w/o a landmark to help. 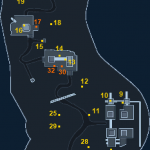 “# of collection that matches the map” “Description” “(1-5 Difficulty in seeing the collection, 1 being really easy and 5 really hard)”

2. On the dock between the boat and yellow crate (4)

3. On the large boat between the two sets of cargo boxes (4)

4. Far left west side of the pier in front of the metal doors (3)

7. East side of the beach where the sand and rocks meet (2)

8. South of Building #1 next to the palm tree that has TWO bushes near it (2)

9. On the ground in between two cylindrical tanks (3 because certain angles can hide it)

10. The west tower on top of the two cement pipes traveling northward (2)

12. Up the hill on top of the large boulder jutting out of the cliff. You can fly right past it if you’re not careful (2)

16. Inside the compartment on the roof (5 if you’re flying overhead, 1 once you’re in there)

17. INSIDE the building where you fight TORNADO TYRANT. On the second story of the east side of the building. (1)

20. Inside the tower with the satellite on top. Will be on the east edge on top of the rusted pipe (4 until you’ve seen it and know where to look)

22. In the cave area before the boss room, on one of the lower platforms (1)

23. On the second story of the boss room, above the exit teleporter (1)

25. One I missed previously. In a dip where two mountains meet. Near a palm tree and a small rock (5)

29. In a deep shadowed crevice, just north of a palm tree

30. Inside of a room connecting the two large rooms (1)

31. Near the top of the tower on the circular walkway (5)

32. Underneath the staircase in the west room (1)

We would like to say a big THANK YOU to TheLoneLantern for finding all locations and making this map and instructions. We think this will be extremely helpful for all of the DCUO community members and we hope you will enjoy it.

This entry was posted in guides and tagged Collection, Oolong Island. Bookmark the permalink.