A Sneek Peak at DCUO The Battle For Earth

DCUO team offered an exclusive sneak peek to the next upcoming content update The Battle For Earth. The Update continues the epic story in the mythical island of Themyscira and adds new epic 8-person raid, weapons, armor. 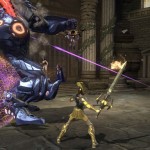 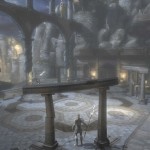 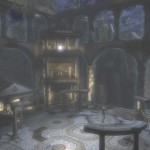 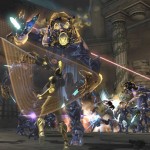 The mythical island of Themyscira itself is an idyllic place. Filled with the deep mysteries of myth and legendary creatures, and cared for with the Amazons’ ever-abiding love, Themyscira glows with beauty and goodness. Like the Amazons and Wonder Woman herself, however, the island is strong at its heart and ready for war.

Now with Themyscira crippled by Brainiac’s siege, defending the island is left to you. Wonder Woman, Circe, and their allies will be along to provide support, but it will be up to you to best utilize their abilities. Whether you’re clearing a path through the battle so the Cyclops can assist you in breaking down the main gate, powering Living Statues to ground Brainiac’s airborne assault, or forming a strategic front so defending Amazon archers can fire, in Themyscira, tactics and strategy may make the difference. The environment and a host of allies can be used to great advantage – or not – and it is entirely up to you. Be warned, though, you will need every advantage you can find if you’re going to battle your way through Brainiac’s near endless array of twisted, chimeric forces.

And if you survive, of course, the Avatar of Magic is waiting.
Earn new weapons, new armor, and more in this epic 8-person raid, coming March 13th and 14th in The Battle For Earth!

This entry was posted in news and tagged 8-person raid, The Battle for Earth, Themyscira, update 9. Bookmark the permalink.