The year behind us was probably one of the worst years for the MMORPG genre. We saw several rushed out releases that brought shame to the IPs that powered them. We saw the quickest closing down of a high budget MMO in history. The only thing that seem to have made money are games for teenagers and browser games.
For the first time in our 4 year history we will be doing a network wide Editorial on all our MMORPG Life sites and the topic will be huge MMO games coming out this year and what we expect of them. The honor to be presented first is the soon to be released Rift by Trion Worlds.

Rift: Planes of Telara is a fantasy MMORPG made and published by the industry newcomer Trion Worlds. The game is set in a unique world of Telara that represents an intersection of several powerful planes of reality. As such it has drawn the attention of the mighty elemental gods of the Blood Storm led by Regulos, god of Death. As Death gods tend to do he attacked Telara and it is up to its denizens to try and defend it from the oncoming invasion.

We had the opportunity to play in the invitational closed beta events Trion Worlds has been holding in the past months and here are my impressions of what I’ve seen in my short time in Telara.
If you haven’t managed to get into one of these events and are curious to see what the game is all about you can also pre-order the game and that will grant you access to all the remaining beta events as well as early access.

When creating your character you can choose between two factions (Guardians and Defiants) with three races available for both factions. Everything you would expect from a character creation is there and you can make your toon look just the way you want it to. You can also pick one of four typical fantasy RPG prototypes – Warrior, Cleric, Mage or Rogue – and don’t worry – you will be able to further define your character’s class the way you’ve never seen before. 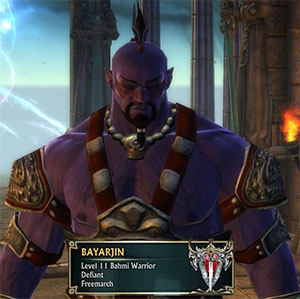 The end of the world is the beginning

Once you enter Telara you will realize that the world is ending and that Regulos has already won – gg, gl, hf, kkthxby. Well, not exactly. In its desperation the survivors have managed to bring some of the fallen heroes back from death (you) and are sending you back in time to prevent this awful future. Your adventure to go back at the very beginning of Regulos’ invasion is in fact your tutorial land where you will learn all the basics like questing, choosing skills and talents and all that other new player stuff.

The first thing you’ll notice is that everything runs very smooth. In fact, everything works just like you would expect it to without a single bug in sight. The game in its beta state is 30% better done than 50% of live MMORPGs out there. The second thing you will notice is that everything is exactly where you would expect it to be. Quest journal and tracker are familiar to anyone that ever played any other RPG. Movement, combat mechanics, quest mechanics, NPC interaction, everything fits like an old glove and it took me about 30 seconds to get into the game and start playing. 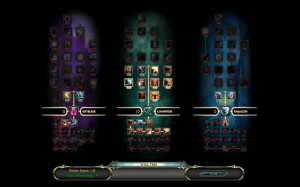 One of the first things you’ll notice is different from the norm are the soul (talent) trees. By level 7 or 8 you get to choose up to three different type of talent trees that you can invest talent points in. You can choose soul trees that complement each other to make you, for example, an ultimate DPS warrior. But perhaps you want to have some skills from one of the DPS trees and some from the tank tree, or crowd control tree? Go ahead, have your fun. In the end there are 64 ( yes – sixty four) combinations of soul trees you can have for you character (sixteen per class) which makes it one of the most freeform class customization systems around. 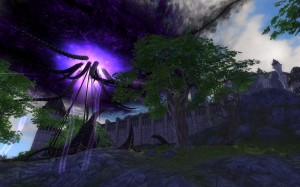 Everything you will encounter is familiar and will probably remind you of other MMORPGs you played, so why bother? You’ll get your answer once out of nowhere the sky grows dark, a Rift between planes opens up and you get your skin handed to you by the wave of monsters that swarm from the terrible inter-dimensional rip. Rifts are visible from afar and usually other players in the vicinity come and help close them. They also do this because participating in these dynamic Rift events brings rewards and tokens you can exchange for gear at appropriate vendors. But most of all, these events and their dynamic and unexpected nature are fun.

Last hours of beta event 5 I participated in one of these event with tens of other players that were there just impromptu. I was too low level for the encounter but with sheer numbers and some luck I managed to survive through wave after wave of enemies. It was a good thing we managed to close that rift because it was so close to town. Failing to do so would have the rift spawn lieutenants that will attack the nearby settlements and kill vendors and quest giving NPCs. Failing to counter them will make your gaming just that much harder (and less fun I’d say). It might get boring after a 100 or so of these events, but Trion has made it clear that there will never be that many of these events that the players can’t handle them. I think they are gauging the Rift frequency and size based on the number of players in the are and the number of times they participated in the event. Check out the gallery bellow to see the Rift event battle.

From what we’ve seen (by the time this article was written beta testers were able to reach level 30) the game keeps its high polish and good quality of content throughout. All of the standards of the genre are covered and everything you would expect to find in a high quality AAA title is present and executed well. This is one of the few betas I participated in that I didn’t find a reason to submit a bug report.

If things are so hunky dory how come there is a cons section? The thing is that everything is so very similar to what we’ve seen in all the other fantasy MMORPGS on the market. You can pick up this game and play it thinking its your old MMO in a new skin. At one point I remember feeling: “Well, this is boring”. I remember reading on Massively that their staff felt the same. I think that there might be a problem with me in all this. I have 4 MMO subscriptions at the moment and I am reading news about two upcoming MMOs regularly. Exciting me could take a bit more risk than Trion Worlds is ready to take with their first MMORPG.

In all fairness I must say that Rift is a very well executed and very well polished game that deserves every fan of the genre to at least not dismiss it up front. After all the disappointments of the previous year Rift is a refreshingly content rich and problem free experience that is sure to have a lot of fans. Veterans of the genre will be content with the game, but I wonder what will happen with these players once the novelty factor wears out. Those that are new to the genre will be lucky to have Rift as their first experience in MMORPGs and will probably think this is the best thing since sliced bread.

DISCLAIMER: This editorial contains a paid advertisement by Trion Worlds and might be considered an advertorial. The review however does reflect the opinions of MMORPG Life staff and is based on our actual in-game experiences.

This entry was posted in Editorial and tagged 2011, best of, beta, gallery, mmorpg, review, rift, trion, video. Bookmark the permalink.