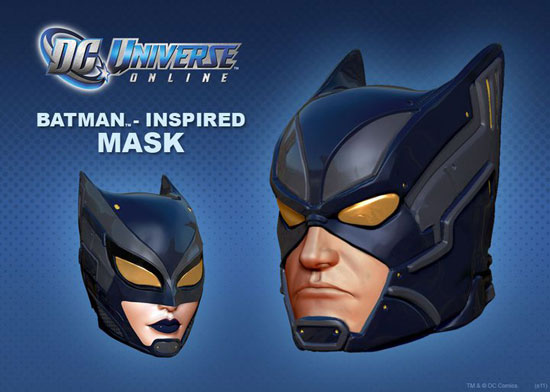 On the Official Facebook page, Sony Online Entertainment has confirmed that DCUO players will have extended thirty day subscriptions and Batman mask for their characters.

We wanted to provide everyone with a quick update regarding the “make good” plan you’ve been reading about. First, all impacted players will receive 30 days subscription credit plus one day for each day the service was unavailable. Also every impacted player will receive a Batman™-Inspired mask appearance item. Please bear with us as the complexities of the subscription server dictate how and when this will be available along with pertinent details. We will be releasing more information this week. Thanks again for your patience!

The recent FAQ updates about the criminal attack on SOE network:

When will SOE’s services be back online?
We have been working around the clock to restore operations as quickly as possible, and we expect to have some of our games and services up and running soon. However, we want to be very clear that we will only restore operations when we believe that the network is secure.

How is the SOE intrusion related to the PSN/Qriocity intrusion? Was this a second attack on SOE?
While the two systems are distinct and operated separately, given that they are both under the Sony umbrella, there is some degree of overlap in design. The attacks were similar in nature. This is NOT a second attack; new information has been discovered as part of our ongoing investigation into the criminal attack in April.

How is SOE planning to notify customers whose data may have been stolen?
We are sending out customer service notification emails to the email addresses we have on file for the accounts that were affected. These emails will be sent by Innovyx, our third party email distributor, and contained either ‘soe.innovyx.net’ or ‘soe.sony.com’ in the sender field.

SOE initially thought no data was extracted, what changed?
Essentially the perpetrators used sophisticated means not only to access the data, but also to cover their tracks. We committed to continue the investigation and in doing so, uncovered further information that we did not have when we initially believed the data was not stolen.