The Fortress of Solitude is an eight-man raid which requires the Tier 3 level armor. One of the main rewards for successful players is Marks of Krypton, which players can use for purchasing powerful new gear in the Watchtower or Hall of Doom. 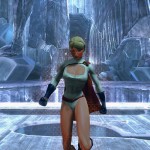 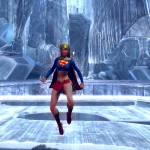 Strat:
Pretty Much Tank-N-Spank, Watch out for SKULL attacks i.e [Frost Breath/Fire Breath/Bizzaro Lunge] if you want a clean run. There is a chance to get any of the 3 bosses in the first boss fight. What ever boss your fight 1st you will not fight at THE FORK. Example: [if you fight Power Girl first you will fight Bizzaro and Super Girl] 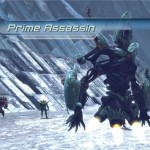 Strat:
CHARGE ATTACK: The boss will Charge up and beam across the room. Make sure you Block this.
TELEPORT: The boss will teleport towards the middle of the map and do a MID-RANGE AoE, this MUST be BLOCKED or you will DIE. You will notice YELLOW RINGS on the ground after he teleports.
PILLARS: After the boss does his teleport he will spawn 5 PILLARS: GREEN-RESTORATION-[These HEAL him] BLUE-IMMUNITY-[These make him take MINIMAL DMG] RED-AFFLICTION-[These will INCREASE DMG] – When the PILLARS are up DESTROY all but ONE, If they all get destroyed he will RESTART his rotation.
ADDS: After the boss spawns the pillars ADDS will come, SUNSTONE ASSASSINS, have your OFF TANK pull these so they can be AoEd down. If everything is done right the fight then becomes a Tank-n-Spank. 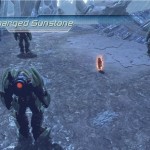 Strat:
CRYSTAL: Have a DPS carry the crystal, use SKILL 4 to run faster.
TANK/HEALER: Have your tank pull the SUNSTONE ASSASSINS off the bridge and have ONE healer on that tank. Everyone else focus the SUNSTONE SENTRIES until the defens timer runs out. If the Sentries hit the Ice-Pillar 2x you will have to start the process over. 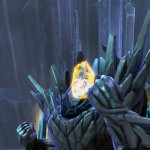 Strat:
This boss spits ICE BOMBS out, avoid them they do about 500-900dmg a pop. When he starts to POUND the GROUND – BLOCK, if you don’t block you will die in about 3-5hits. There will be an EMOTE and some CRYSTALS DROP, makes sure you pick those up and carry them to the locations. The boss will then SHRINK and do a GROUND POUND – BLOCK. The boss with CONTINUOUSLY spawn SUNSTONE SENTRIES, have your OFF TANK pull these and AoE them down. If your DPS is not HIGH enough you will be overwhelmed with add and eventually die.

Additional information
For Jor El, we tried a number of tactics. There is only one that works and its having good enough DPS to keep down the adds. AoE supercharges helped here too. We shrunk Jor El twice and locked him in that size. EVERYONE had to block through ground pounds, and then the tank gathered adds while the DPS nuked them down. Even with 3 high DPS we would get backed up in time, so we set up a system of alternating supercharges anytime we had 6 guys up. It really seemed to help. It was a close fight but we got it.

Alternate strategy
NO DPS. Our DPS are Mental and Ice. Whatever class you are, go into your alt role. Three controllers, three tanks, and two healers = a LOT of survivability while waiting for the crystal to secure. Not to mention six members of the team with pulls to get the sentry’s away from the crystal. Even if the DPS are Sorc or Nature… four healers should provide the survivability to survive the 60 seconds or so it takes to secure once captured. This part could go by surprising fast if you play it right and run the crystal to the capture pillar.

This part will make you split your teams into 2. Make sure your evenly split your teams, there is no trick around this. There will be adds on both side and consoles to hit. RIGHT side will fight BOSS 1st. LEFT SIDE will fight ADDS. If LEFT SIDE WIPES the boss will ENRAGE and one shot the team fighting him. Once the boss is at 50% +/- HP a console will activate, hit that and the fight is over. After this you will progress fight more adds and come to another console. Both teams will advance until you come to a meeting point. 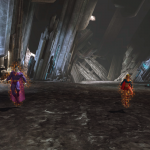 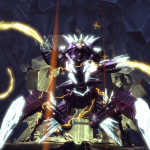 Strat:
TENTICLES: these will consume 1/3 of the area you fight in and will ROTATE CLOCK-WISE. do not get near these they hurt. FLOATING ORBS: there will be PINK floating orbs that have a small radius of about 5-10 meters. they do about 500-900DPS. AVOID THESE. BOSS: have your MT pull the boss to an area that doesn’t have tenticles and TURN HIM. When the boss turns to the team, BLOCK. The boss does a FRONTAL CONE AoE and LEG STOMPS, these HURT. At about 70% the boss runs to a GENERATOR and starts to charge up. there is a meter 0/100. TANK: Have your MT pop reflect and activate the 2 generators that are up. TEAM: Have your team stick to gether as a WHOLE and rotate to the SEMI-CIRLCE with no tenticles. Rinse-and-Repeat until the boss is dead.

Additional information:
First thing first, if he faces you, block. He has HUGE and LONG AoE cone attacks that will wreck you. Watch out for hte orbs that fly around the room, they are very problematic. Expect LOTS of deaths.

There are tentacle fields that spawn in 1/3 of the room. We labeled these areas as “North” “South” and “Door” so people knew where they were. We called out when they would go down so people could move toward a central location and be able to adjust for hte next spawn. We found if you get caught in them, rolling is your best bet to get out without dying.

Once AoM is around 70%, he will move toward one of the generators and you have to hit a switch on the other two. This is trivialized by sending an ice tank in, popping reflect, and hitting the switch. With proper timing you can do it with no problems.

If you die, the NPC’s (Superman, Zod, Lex) will sometimes help you out with a rez.

Another strategy
Use two tanks on the Avatar of meta, tanking side by side and the Avatar will NEVER face the group

We would like to say a big THANK YOU to Ecchymosis and DCUO community for making this guide and great videos. We think this will be extremely helpful for all of the DCUO community members and we hope you will enjoy it.