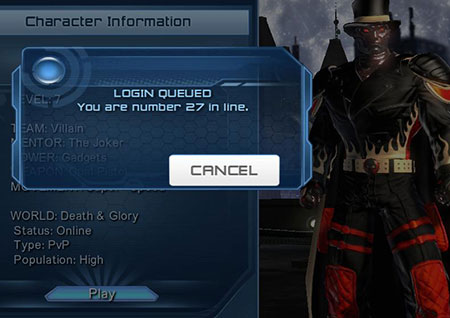 For some reason DC Universe Online is not getting the amount of attention some classic MMO games get. Whether that is caused by the console feel the game has (which makes it foreign to the PC crowds that are MMORPG fans) or the fact that it is an action MMO that asks for much more involvement than your average WoW clone or SOE just didn’t do their marketing right; Whatever the case is the game is not all over the news sites and other than a few rehashed press releases and a very small number of fansite generated content I feel that everyone is waiting for the first game impressions from the players themselves rather than doing the usual game launch hype stuff.

In order to provide some hands on impressions here’s what I have to say. The game is EPIC fun! After years of doing same old (with twist here and there but still same old) the fact that I spent 2 hours last night open world PvP-ing just for the hell of it (without any item reward incentives btw) says a lot for me. People are totally immersing themselves in their superhero/supervillain fantasy and due to being very close to each other and occupying almost the same quest space from level 3 basically everyone is fighting for their dear lives from moment one and it is fun, fun, FUN! The action aspect is probably the thing that makes it so cool, because you have to do combos with your mouse buttons and move around to avoid being hit and block and pick the right talents in order to have proper skills for that situation which is all resulting in me spending 2 hours of smashing my mouse and keyboard non stop. Remembering how I could PvP in most games by just clicking on the skills fades in comparison to the button smashing fest DCUO is. For a pure PC gamer this is a novelty.

Traditional MMORPG components have a lot of space for improvement though. The dreaded social and chat system, that is adapted for console use, will probably look like a joke to people coming from WoW or LOTRO. There are bugs and missing strings showing up from time to time (might be caused by me using the beta client for playing). The graphic engine looks alright, but when you come in closer there is a lot of space for improvement. I get 150-300 FPS on my rig with full details, compared to Rift’s 30-50 it fells like we’re back in 2006. I miss antialiasing and higher resolution textures, but in all honesty the feel of the world is dead on and the look of characters is very unique and I have spent time just looking at what other people created.

Quests are your regular collect this, kill that many bad/good guys. Here’s the twist … when you get a quest from the Joker (I use the in front of his name – always – he is the Joker – remember that – or he might come looking for you – crazy bastard) to go kill 10 cops, he gives you these bombs to put on them and then cops explode into confetti – CONFETTI I tell you. Within the first 5 levels I already had a special mission where at the end I was fighting alongside Catwoman against the Huntress and I had to figure out her special moves in order to defeat her and not die in the process (hide out of line of sight when she fires her bolts, stay close to Catwoman when Huntress goes stealth). Questing might not be revolutionary, but quest content and the way it is presented is fun, fun, FUN!

I am hoping that SOE will fix the bugs and improve on the PC experience. In the meantime I will be having my adrenaline filled fun fests in the game … unless the queue showed in the image above becomes a problem 🙂

This entry was posted in blog. Bookmark the permalink.